Today it was finally time to say farewell to Dad, who had passed away some four weeks ago. 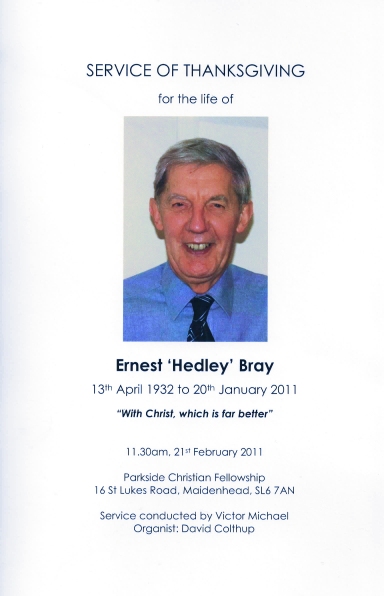 We had a great turnout of almost 120 people, at Parkside Christian Fellowship, who came along to pay their respects and say goodbye to Dad, including several from the company where Dad used to work and others from all parts of the country.

Victor chaired the service and began by giving a contemporary reading of Paul’s description of a Christian character which he linked in to also being the characteristics that Dad displayed in his life.

I then read one of Dad’s favourite Psalms, Psalm 8.

The opening hymn was How great Thou art.

Adrian then opened in prayer, particularly giving thanks for Dad’s life, his faith and the fact that he is now with his Lord.

This was followed by the reading of Psalm 46, which was read by Dad’s son-in-law, Martin.

The first tribute was read by Dad’s brother, Dennis and focussed on Dad’s early life and growing up initially in north London.  Dad was born in 1932 and the family moved to Maidenhead in 1937.

Dad with his sister Myrtle and older brother Dennis

Dad showed an early interest in music and started playing the piano at the age of six sparking off a lifelong musical talent.

This musical talent also came to the fore as Dad was able to correctly identify several planes in the war just by listening to the tone of the engine.

Dennis ran through several amusing stories of Dad’s childhood and gave a ‘potted history’ of his life.

Dad and Mum on their wedding day in 1961

Adrian then read a tribute that Mum had written about her forty-nine years that she spent with Dad. This mentioned many happy memories of holidays as well as Dad’s fondness for the washing up and gardening.  Mum and Dad enjoyed travelling overseas to Switzerland, Austria and Norway where they spent many happy visits.  It also touched on how much Dad would be missed by all the family, including his seven grandchildren. 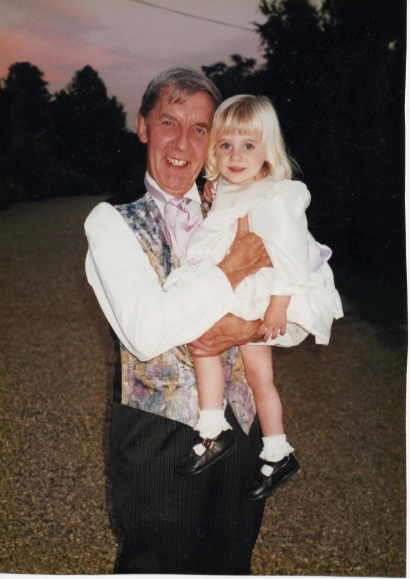 Dad with his grand-daughter, Katy

Heather painted a happy picture of her own childhood growing up, regaling a number of amusing incidents including Dad’s famous compost heap as well as his various incidents with second-hand cars and the amusing story of the picnic bag!

Finally I gave a shortened version of my blog post following Dad’s passing away.

The second hymn was In Christ alone.

John Milward, formerly of Milwards Shoes, gave a short tribute of Dad’s work life picking Dad out as being a ‘dedicated colleague’, a ‘loyal friend’ and a ‘man of God’.  His character and personality could be summed up by the word ‘graciousness’.

The final tribute was delivered by Lawson, who had known Dad at Parkside since the 1960s.  He brought out Dad’s dependability and willingness to use his musical and financial gifts while at Parkside.

Even more valued were his people skills and Lawson talked about Dad’s humility, gentleness and encouragement to others.

Ken Ward gave a short talk on the subject ‘Hope for tomorrow’ using the story of the death and resurrection of Lazarus and linking in that Dad will ‘rise again’ when the Lord returns to the earth.

Victor then closed the service with prayer. 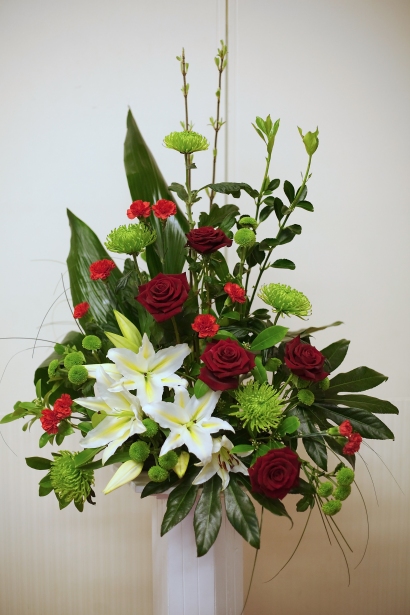 We then adjourned over to the peaceful Long Lane Cemetery in Cookham for a short committal service led by Adrian, with David Angell giving a final prayer.

It was a difficult day, but we felt that the service couldn’t have gone any better.  The various tributes wove together wonderfully well to really capture the very essence of Dad’s character and devotion to his Lord and Saviour.

Dad in the garden

We will all miss him very much, but are thankful that he is now free from all his suffering, and with his Lord.

He was a man that I was proud to call ‘Dad’.