We managed to muster five people out for our first Overnight Walk in two years, after the 2011 walk proved to be a victim of the weather.

Following a slightly chaotic lack of organisation on my part, Andrew Burdett was able to join myself, Robert, Ruth and Sean as we gathered at midnight before setting off in two cars.

@PhilBray @ruthparry I have a map of Eygpt. And I have a pocket map of New York. Also, I have both a ruler and a GPS watch. Will bring both.

@PhilBray Mad dogs and Englishmen go out on a midnight walk!

@PhilBray @ParksdChrstnFwp I've tried contacting you (even tried a number I found on the Ps website) but failed, so expecting it's cancelled

We thought we had managed to pack all of the essentials for the walk, including bacon, tongs and a ‘party sized bbq’ although once we were in Cookham Dean and out of the cars, it transpired that we had only one torch between us!

We had parked at the car park by Cookham Dean Common and the first part of the walk was across a footpath leading to woodland. Once in the woods, we struggled somewhat, initially to select the correct path and also with the lack of supplemental lighting.

Eventually we emerged from the trees onto Quarry Wood Road and, once on the tarmac, our pace picked up somewhat.  Andrew provided some ‘tour guide’ commentary concerning some of the places we passed on our journey.

We crossed the Thames at Marlow Bridge and paused only to take a couple of photos in the darkness.

The Compleat Angler at Marlow

Cutting through some of the minor Marlow roads, we eventually rejoined the river as it flowed downstream towards Bourne End and paused on a bench beside the river for the customary snack stop at around 2am before continuing through gated fields (some of which contained cows!) until we finally reached Bourne End, where we recrossed the river.

Time for a break on a bench by the river. #OvernightWalk

After a short discussion concerning the route, we headed towards Cookham rather than risking the boggy Cock Marsh area by the river and endured the long climb up Winter Hill.  Once on top of the hill our route was again on metalled roads and we returned back to the cars before driving the short distance to the old cricket pitch.

Marlow from the top of Winter Hill

Throughout the night, the sky had teased us with levels of cloud cover, and, as we lit the bbq, there was still no certainty as to whether or not we would see the sun rise.  The early morning air was cold once we had stopped walking, and extra layers of clothing were hastily applied.  Others huddled around the bbq for warmth. Sean lay on a picnic rug and tried to stay awake.

Early indications of a colourful dawn

As they no longer possessed their camping kettle, Ruth had opted for flasks of hot water instead.  These worked well in providing a ready brew while we waited for the bbq to be ready for cooking.

Eventually, with dawn fast approaching, Sean was able to lay rashers of bacon atop the bbq and soon the delicious aroma of bacon cooking filled the air.

As the first rolls were served, the sun emerged from a bank of cloud above the horizon and the sunrise was all we could have hoped for.

http://t.co/IQq5Ljw8 – The sight that makes it all worthwhile!

It had been an excellent night – nine miles of walking completed by a sunrise. 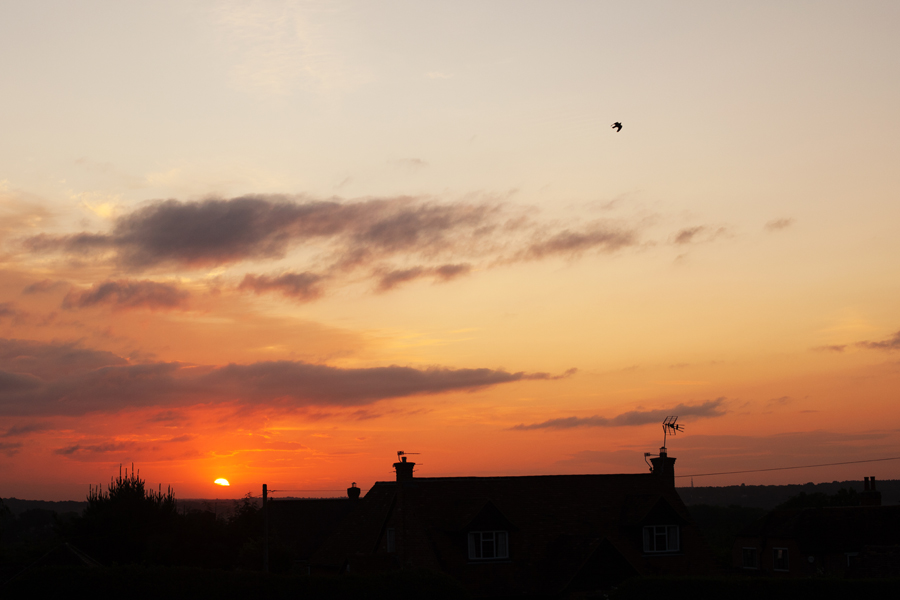 Andrew seemed to have enjoyed his first experience of an Overnight Walk and we all talked of repeating it again next summer.

@PhilBray @seanparry @ruthparry @sparkyboyrobert Yes, thank you all for making me so welcome. I really enjoyed myself – but now can't sleep!

By 5.45pm, we had all arrived home in time to hopefully grab a few hours sleep before emerging for the remainder of the day.